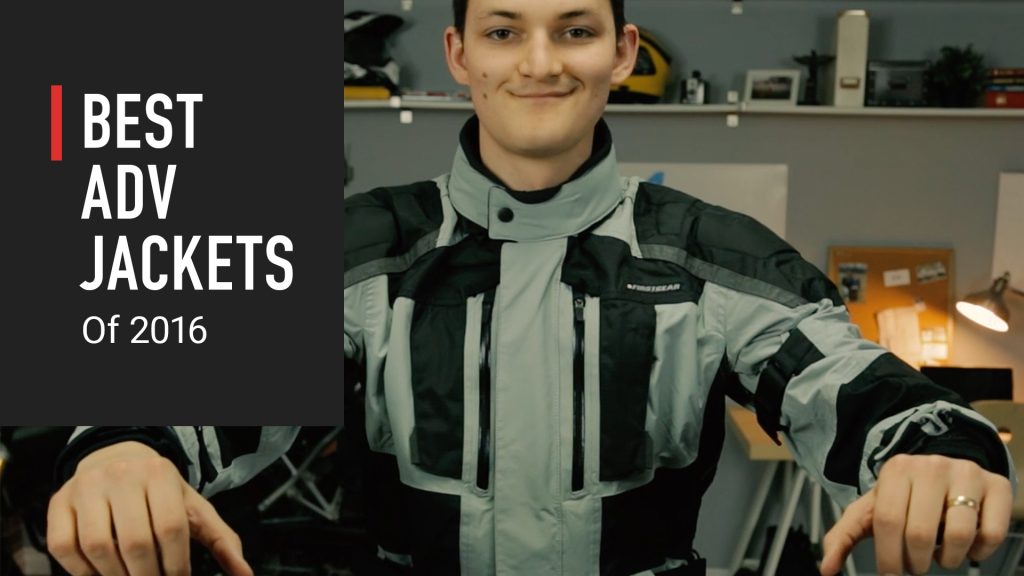 Best Adventure and Dual-Sport Jackets of 2016

First up is the jacket that I would actually buy if I were in the market this season. And that’s the Firstgear Kathmandu. This is a one-stop, do-it-all adventure jacket and the fact that this is only 450 dollars on fortnine.ca is pretty ridiculous, in my opinion.

Number one and number two jobs for an adventure jacket – keep me dry and keep me ventilated. The Kathmandu does it with a Hypertex shell, which is waterproof and breathable like its Gore-Tex cousin. If you want to see Firstgear’s commitment to waterproofing, just look at the seams. Lower hand pockets – one fold there, another fold here – that’s staying dry. The main zipper – one storm flap, another storm flap – no water getting through there. How about these chest pockets – waterproof flap, YKK aquaguard zipper on the underside of it. Firstgear doubled up on all the waterproofing features and I love it. Cause when you’re adventuring, two is one and one is nothing.

Venting is also solid. Two chest intakes – aquaguarded, autolocking zippers. Two big armpit vents and two exhaust slits on the rear. Protection-wise, we have D3O elbows and shoulders. I wish Firstgear kept it up for the back pad though, because it’s a foamie and a pretty flimsy one at that. Slide protection is 420 denier nylon on the high-risk areas, 300 on the lower risk ones. That’s kinda shitty to be honest, but at least it’s lightweight and comfortable.

Adventure jackets often go the extra mile when it comes to features. So the Kathmandu went an extra 10 miles. Open up this collar, and we have an under-the-helmet rain hood to create a watertight interface. I’d probably never use this unless I saw Noah building his ark, but it’s cool to have the option. On the back, there’s a 1.5-liter hydration pack included, which I never see. And this rear cargo pouch has a colossal 14-inch mouth, so you could store the whole removable thermal liner in here, or maybe a foot-long subway sandwich … or a Honda Grom.

Fitment-wise, this jacket comes in tall sizes but you’d have to be built like a broomstick ‘cause I’m 6”3, 175 pounds and this regular medium fits great. I have this slider-snap collar adjustment, 2 compression straps on each arm, cinches on the waist and cuffs, stretch fabric on the elbows and under the arm … Even the cuffs on the thermal liner are stretchy neoprene with adjustment straps.

I must say that this is the most comfortable adventure jacket I’ve ever worn. And it’s not just the customized fit. The Kathmandu is soft and airy all over, whereas other ADV jackets tends to feel a bit like suits of armor.

Speaking of which – rather annoyingly, this is the Klim Badlands. I had to include this thing because it is the best adventure jacket out there. But it’s over 1000 dollars and that makes me really want to hate it.

Of course it has a million features. The product description on fortnine.ca reads like a small novel and RevZilla did a 20-minute breakdown video, so I’m no gonna do that to you guys again; instead I’ll just give a few of my feelings on it.

More than anything, I get an overwhelming sense of overkill. This is Klim’s Talisman SuperFabric, which is basically tiny ceramic plates welded – with a laser – onto Kevlar-infused Cordura. It’s MotoGP-level slide protection but, honestly, I don’t really need that.

Same with the chassis in general. There’s so much Kevlar in here that I basically feel bulletproof. And unless I ride at lightspeed through thornbushes, I probably don’t need that either. What the fabric does do – on a daily basis – is make the jacket really heavy. The Badlands is about 600 grams lighter than the Badlands Pro predecessor, but it’s still chunky. Any jacket that needs a kidney belt just to feel comfortable is too heavy in my opinion.

Of course I’m just ragging on the Badlands because of its price tag. This really is an amazing jacket and I envy a few of its features. With all the Gore-Tex, you could ride through Lake Ontario and come out dry on the other side. The D3O back protector is CE Level 2 certified, meaning that a measly 9kN was transmitted through it in testing. And it’s one of the only jackets I know of that has respectable armour panelling across the chest.

Is the Badlands 700 dollars better than the Kathmandu? No friggin’ way. Is it worth the 1150-dollar price tag? Not to me.

But there are people who ride to the south pole five times a year, and they don’t care that the Badlands costs a small fortune. They don’t care that you have to buy the hydration pack separately, or that there isn’t even a thermal liner. To the most hard-core riders, quality is worth far more than its dollar value.

For everyone else though, we can’t afford to buy something just because it’s the best. I have to weigh up value per dollar on every piece of kit that I buy and if I’m being brutally frugal, the best option is Alpinestars’ Andes Drystar.

This is right around the 300-dollar mark on fortnine.ca, which is where adventure jackets tend to bottom out. What we’re looking at here is 600-denier polyester with a polyurethane coating, and it’s waterproof and breathable … to a point. This material won’t last a full day in Vancouver, but at least Alpinestars was honest with themselves about that. They put a waterproof lining on the inside of the jacket as a sort-of Plan B.

Speaking of the jacket interior: removable thermal liner, zipper attachment for Andes pants, dropped back and one, two, three cargo pockets on the liner – all of which are mirrored on the jacket body and I love to see that.

Fitment-wise, it’s pretty darn customizable. Strap adjusters on the waist, cinches on the hips, two volume options on each arm, some stretch fabric there too, Velcro around the cuffs, and a couple features on the collar. It can be snapped down at the back, closed loose or tight with this Velcro, or hooked back with this elastic loop.

It’s a comfy jacket, maybe one notch below the Kathmandu, but be careful with the size chart online – I’m a 39-inch chest and a 24.5-inch arm, which would put me somewhere between a medium and large. But this is an extra large and I think it’s the right fit.

The external pocketing is good – waterproof cargo areas on the front, two not-so-waterproof pockets on the chest, a stash pocket under the storm flap and a huge utility pouch on the rear. But this jacket really suffers in terms of ventilation. These rear exhaust slits are all of 5-inches long and the only other vents – on the collarbones – are just as small. The other lowlight is armoring. CE-approved elbows and shoulders are fine, but the spine protector is cheapo foam that I would replace straight away.

The Andes Drystar doesn’t do anything special. But it’s a solid adventure touring jacket that is built well and it feels more expensive than it really is.

I’m gonna end this list with my own jacket – Icon’s Raiden DKR. This is a brand-new glory version, but you can see my tan one on the hook back there.

In my experience, Icon did three things really well. One of them is waterproofing. I did twelve straight hours in the pouring rain in this jacket, and I stayed dry for ten of them. That’s about as good as I can expect, this side of the Klim Badlands.

The second big thing is temperature control. Two long chest vents, which are a pain in the ass to open while riding by the way. Then there are massive underarm vents and on the back, this long exhaust slit. I rode all summer in the Raiden and only suffered in the slowest of traffic jams. On that note, I also rode into late November with this removable thermal liner. I was layering pretty heavy by then, but this is Icon’s relaxed fit so there’s room for that kind of thing.

The third big win is style. The graphics are awesome; the bomber-style fit is cool. This storm flap closes with rare earth magnets and this waterproof pocket is on some kind of rubberized slider, which I’ve never seen before. The inner liner is quilted, you get badging for all the D3O armor and other tech in this jacket. Even on the cargo pockets, there are little mantras sewn into the liner.

One complaint I have is this hook. Icon sells a hydration pack separately, which clips onto the back of the jacket and runs its tube up through here. But when I open or close my helmet shield, the strap on my cuff gets caught on this hook. It’s a weird little problem, but it happens all the time and it’s kinda scary because all of a sudden I’m riding with one hand stuck to my chest. Easy fix though – I just ripped the hook off of my jacket.

My other complaint is the price – 480 dollars makes the Raiden equal in cost to the Kathmandu, and that’s a big problem because the Kathmandu blows this guy out of the water in every single way except for style. I was vain enough to choose the Raiden anyway … but I suspect that most adventure tourers would make the wiser choice.

And that’s it for my favorite adventure touring jackets! Products links below, comments below that, and thank you guys very much for watching.